According to the Merriam-Webster dictionary, a museum is “an institution devoted to the procurement, care, study, and display of objects of lasting interest or value”. But what if you could take a museum with you wherever you go? Hard to imagine? Then we invite you to explore the Museum of Portable Sound. The Museum of Portable Sound (MPS) is a nomadic museum of field recordings available on the phone, offering visitors based in London a unique sonic experience. It was launched in 2015 and has been expanding ever since.

John Kannenberg, the founder of the museum, is a researcher and sound artist. He is also the author of an essay “Listening to Museums: Sound mapping towards a sonically inclusive museology” that talks about sonic experience of museums. Kannenberg's sound maps have been sold as CDs by record labels. His field-recording practice is reflected in what he envisioned for the Museum of Portable Sound: “deconstructing and reconstructing museums in a way that reorients the museum experience around a non-ocular-centric experience.”

So, how does it work? Visits to the museum are conducted on a one-by-one basis. First, you have to fill out the contact form on the website and schedule an appointment with John. He brings the mobile phone that the museum's sound files exist on, along with a map and a museum guide. Afterwards, you are free to visit the galleries.

John Kannenberg: “I like to say that the Museum is not an app, it's an experience: I see it as a piece of post-internet art, a statement on digital audio distribution, and a piece of performance art all rolled into one… A portable museum is a museum that can be carried around easily, like Marcel Duchamp's 'Box in a Valise,' another artist's museum. There have actually been quite a few portable museums since then, so mine is just the latest in a long line of influence. Mine might be slightly different because it only contains sounds to listen to.”

John Kannenberg: “I had been working on a plan for a giant physical museum of sound, one that I imagined would be as large as something like the Met in New York or the British Museum, but it felt far too abstract, and I was eager to try out the idea of a museum that is purely listened to before I would try to fully conceive of anything so elaborate.

It's definitely an alternative to a conventional museum space. I've been listening to museums for almost twenty years now, and it finally dawned on me what I was listening for: I was listening for sounds that were collected and displayed by the museums like the physical objects are. I didn't find very many, so ultimately I decided to start doing it myself… I'm very much interested in deconstructing and reconstructing museums in a way that reorients the museum experience around a non-ocular-centric experience. My museum sound maps have all been about an hour long each so far, and I've made them of places like the Egyptian Museum in Cairo, the Art Institute of Chicago, Tate Modern in London, and the Pitt Rivers Museum in Oxford.

The gallery guide acts as a substitute for what you would see on the walls of a typical museum, including object labels and didactic texts for each individual gallery, along with supplementary essays about specific topics related to the objects on display. The Gallery Guide also includes an image of the waveform of each sound in the collection, in an attempt to embody the sound and give visitors a visual reference for what the sound might sound like. The interplay between the waveforms and the sound files seems to be a good idea, as many visitors have mentioned that they start listening to something based on seeing the waveform and wondering what it must actually sound like.” 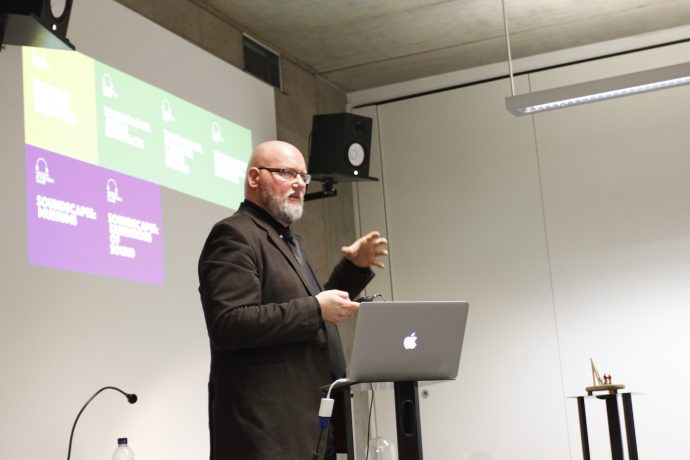 Museum of Portable Sound
1 of 9 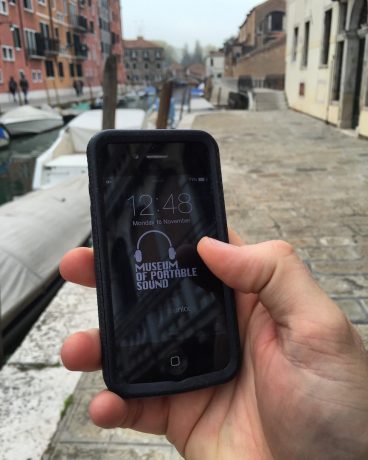 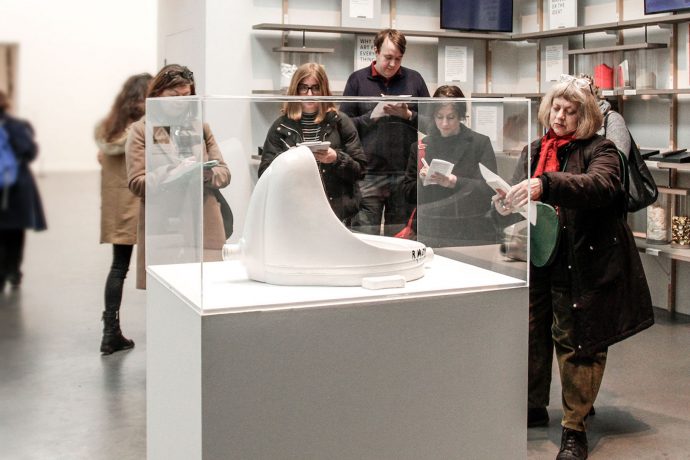 Museum of Portable SoundListening To Museums - Tate Modern
3 of 9 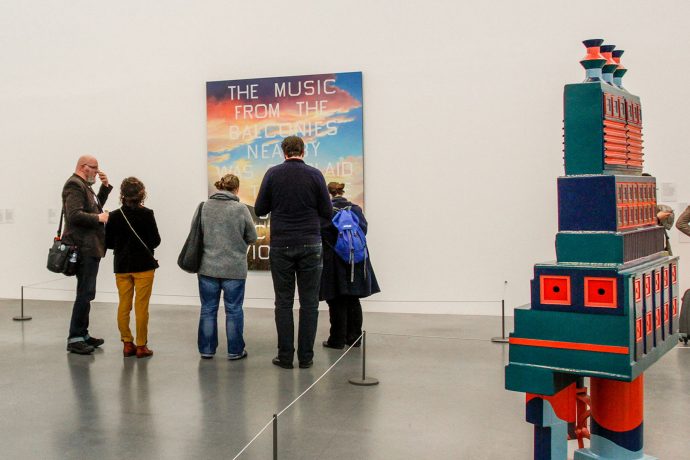 Museum of Portable SoundListening To Museums - Tate Modern
4 of 9 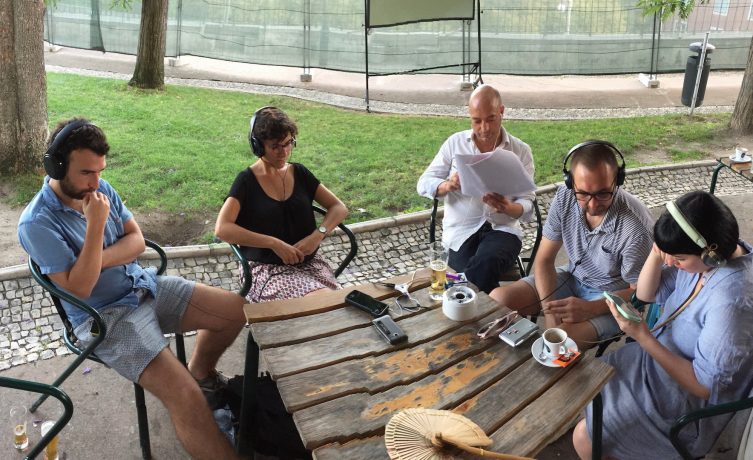 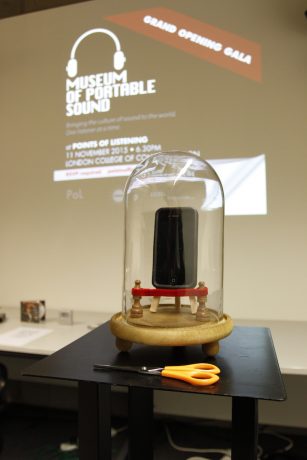 Museum of Portable SoundAt the Museum’s Grand Opening Gala, the Museum was displayed inside a glass vitrine before its ribbon cutting ceremony. Photograph by John Kannenberg.
7 of 9 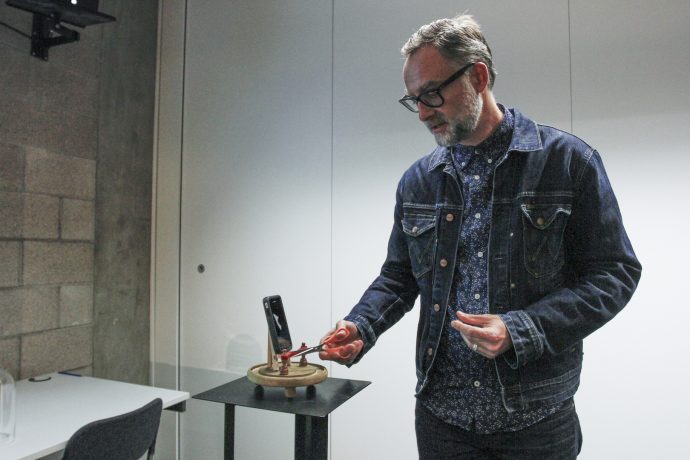 Museum offers Guided Tours, a 30-minute material from the permanent collections. Each is organised around a theme: Music, Technology, General Knowledge and Relaxation. Visitors can choose to listen to one of these tours, or they can choose their own path through the collections by using a map and the Gallery Guide. Apart from Guided Tours, the museum also offers an educational course “Listening to museums”.

But there is more to it: it has its own gift shop offering museum-related merchandise such as iPhone cases, tote bags and t-shirts!

“Museum of Portable Sound is a museum experience stripped down to bare essentials, free of architecture and physical movement. But that doesn't mean it's just about listening: the museum takes on several sensorial connections. We usually meet in a café, so visitors are usually eating or drinking as they visit; there is usually a crowd of other people around through which they navigate in order to meet me; there is the journey to and from the meeting place as well. Even though it's a museum of sounds, because it's presented in such a personal, one-on-one way, there are many different sensorial aspects of the experience.” 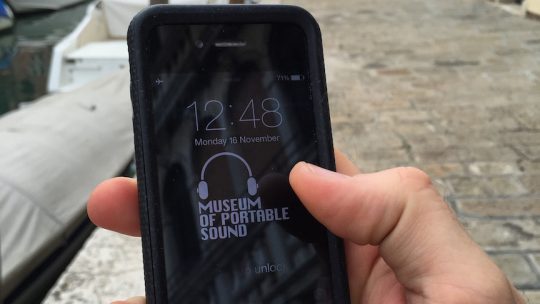