In a constant effort to define what it means to be a museum, we at Museeum set out to visit MAK Center's Schindler House.

The MAK Center for Art and Architecture, located in Los Angeles, currently operates out of three separate locations: the Mackey Apartments, which host MAK's residency program, the Fitzpatrick-Leland House, home to their Urban Future Initiative Fellowship Program, and of course the Schindler House, which serves as the headquarters to the MAK Center, but is currently being beautifully invaded by Pacific Standard Time's exhibition "How to Read El Pato Pascual: Disney's Latin American and Latin America's Disney." This allows the MAK Center to presently function as a museum of sorts.

So let's digest all of this in parts, starting with location. A masterpiece undoubtedly, the Schindler House, which is a decadent piece of architecture created in 1922 in the middle of the Hollywood Hills of Los Angeles, is considered to be one of the most remarkable works by Viennese architect Rudolf Michael Schindler. The beautiful single family home features an open floor plan, sliding doors, glass walls, many-many fireplaces, shed roofs, and a patio/garden or "living patio," which is currently growing lavender and tomatoes in its flower section among many other herbs I failed to recognize, and would make anyone fall in love with the simplicity of nature (no lie I want to go meditate there every day from now on). The Schindler House, according to the MAK Center, was conceived of by incorporating both architectural and social theory; the masterpiece was made in four distinct phases, each with a development theme, and thought of as having four main rooms. It was designed in this way to allow each person in the household to express their own individuality free from each other yet cohesively.

Enough about the wonderful location, let’s talk about the exhibition and the art. As I mentioned previously, The Schindler House is currently inhabited by PST: LA/LA (which is actually the reason I came across the need to discover this gem). PST: LA/LA, or Pacific Standard Time: Latin American & Latino Art, in Los Angeles is "a far-reaching and ambitious exploration of Latin American and Latino art in dialogue with Los Angeles. Led by the Getty." That's right, a few years back Getty granted hundreds of thousands of dollars to more than seventy institutions to create exhibitions around the theme of Latin American and Latino Art in LA. The MAK Center's Schindler House is one of about seventy-five exhibitions spaces that have taken on this happy task. Actually, this particular exhibition is so vast that it takes on multiple spaces. Because of this, the MAK Center has partnered with Luckman Fine Arts Complex at Cal State LA to explore this same subject matter.

Now, let's delve into the art itself. "How to Read El Pato Pascual: Disney’s Latin America and Latin America’s Disney" is a beautifully curated exploration by co-curators Jesse Lerner and artist Rubén Ortiz-Torres, who gathered over one hundred and fifty works by over forty-eight artists to explore the exchange between Latin America and Disney through painting, photography, drawing, sculpture, video, and documentation alike. 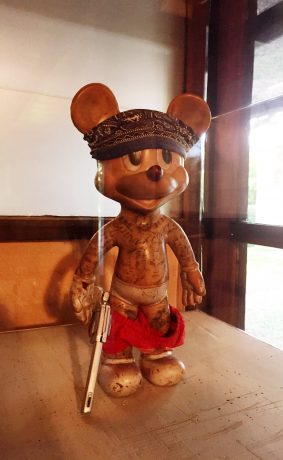 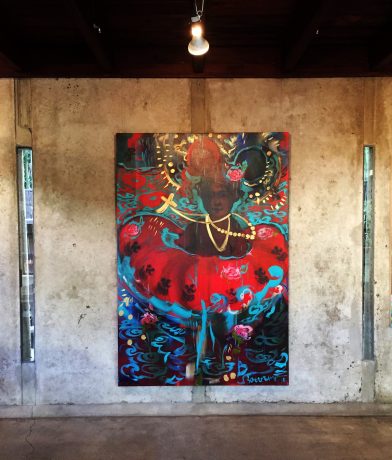 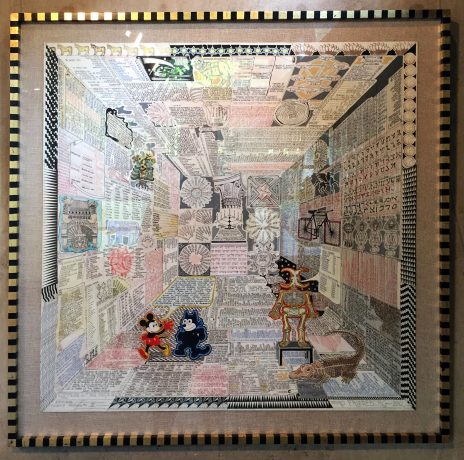 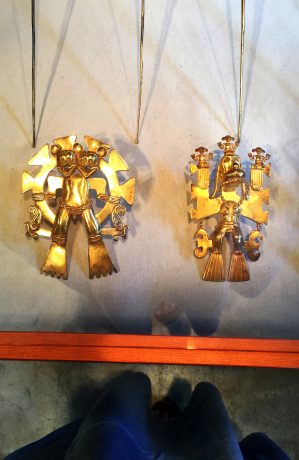 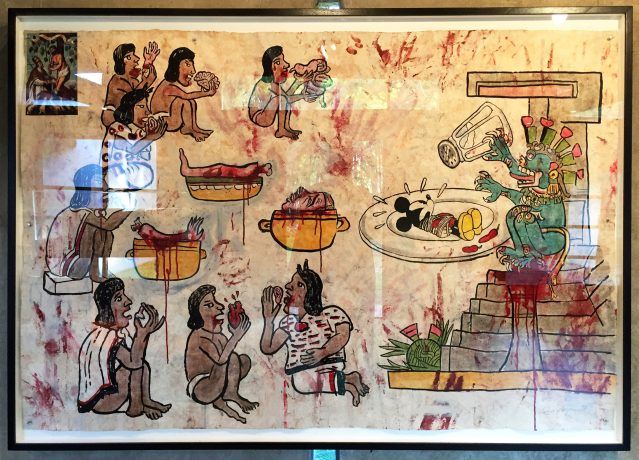 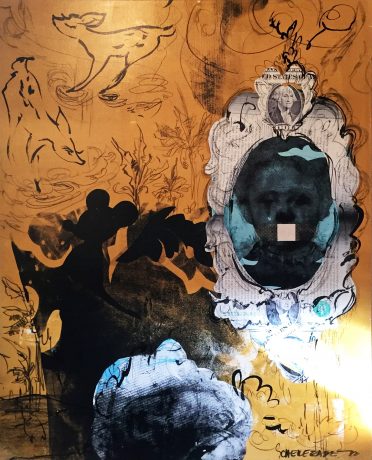 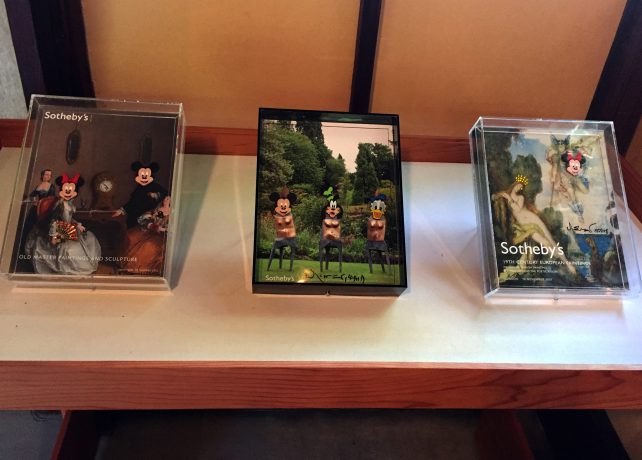 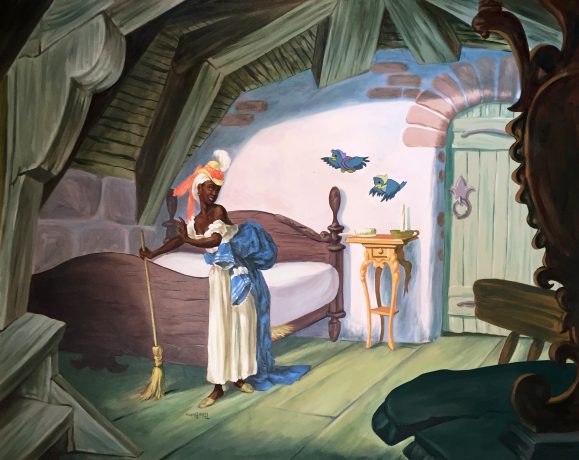 The artwork itself was nothing short of magical. Nadin Ospina's sculptures showcasing Disney characters as Pre-Columbian stone carvings or gold artifacts completely blew me away; take Goofy, sit him on a Mayan pedestal, carve the entire thing in stone, and genius emerges. Enrique Chagoya's "The Governor's Nightmare" which is a codexesque wonderful depiction on amate paper showing a Tzitzimitl (a lesser deity of the Aztec pantheon often associated with the stars) pouring salt on Mickey Mouse, who lays on a plate, surrounded by chillies about to be eaten, while a group of people devouring human flesh appear to be enjoying a celebration around the scene — it was definitely a show stopper. Not to be outdone by Dr. Lakra's sculpture of Mickey covered in tattoos holding a gun, Pedro Alvarez' Cinderella's Main (with bluebirds), Nelson Leirner's Sotheby's Collage, or Pedro Friedeberg's "Mickey Codex," (which is very true to Friedeberg's stylistic aesthetic explorations) where he merges surrealism, design, architecture, and conceptualism in order to visually give birth to an Art Nouveau-esque type of Op Art that is unique to the Friedeberg aesthetic vocabulary. While Scherezade Garcia depicts Baroque yet contemporary allegorical silhouettes of Disney characters and young children that made me reminisce about a time in which I myself enjoyed visiting Disneyland as a child or watching the movies with my parents and now even my siblings. Thoughts which landed the entire conversation had, by the exhibition upon my shoulders, made the entire exploration now intricately personal.

Somewhere in between the various depictions of some of my favorite cartoon characters as a child, and the contemporary aesthetic interpretations of the same in a space no larger than a home, I felt a unique sense of intimacy at the Schindler House, no doubt inspired by Scherezade Garcia. A few works were on display in the kitchen quite close to a functional sink, while a few others were in the dining room. The house lacked most modern furniture, but the fireplaces and slighting doors made it very clear what the purposes of the rooms truly were. I felt like a child in a maze wondering around the various rooms; I kept imagining that at any point larger than life card-like characters where going to entice me to paint roses red, but also a great calm and serenity enveloped my entire visit as well.

Even though the Schindler House is located in the middle of the Hollywood Hills, in the giant metropolis that is Los Angeles, inside that home, due to the architecture, the nature-scape, the artwork, and the immersive peaceful exploration I stumbled upon, I felt far removed from the city. As if this home had the aura of most museums — a happy aura or chi flowing all around it — it somehow managed to silence the chaotic nature of the city; it was as though I had stepped into Wonderland to indulge, if only for a few hours, in a reality that somehow lives separate from my everyday life. I wandered around the house and the living patio a few times, and each time I found myself lost in the wonder provided by the artwork in this particularly unique and intimate setting. It was inviting, peaceful, charming — all the happy feelings. It might not consider itself a museum, but it certainly has museum-like qualities, more so that all the mega-trendy, Instagramable, museum-selfie driven pop-ups that are currently plaguing this city and many others alike. This wonderful exhibition with its beautifully curated amazing artwork and entrance design, serene location filled with knowledge waiting to be discovered, created an inspiring sense of happiness flowing all around... Now that's a museum to me! 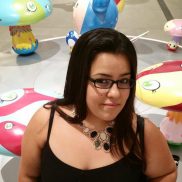 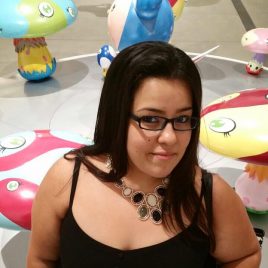 Erika Hirugami is the Founder and CEO at CuratorLove, as well as Curatorial Director for a few galleries in Los Angeles. Through her masters in Art Business from Sotheby’s Institute of Art, Erika has developed a particular interest and extensive… Read more 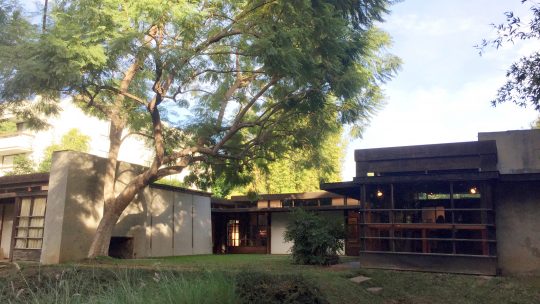