Jutting out of an ordinary building in San Francisco is a massive crystal, several stories tall and tucked between the edges of a Catholic church and a hotel. This is the Contemporary Jewish Museum, housed in a former power station built in 1907 and renovated in 1998.

"The new growing out of the old" is truly the best way to describe what can be found within this exquisitely designed shell. The contemporary Jewish Museum is non-collecting, so everything housed within is completely fresh upon every change of exhibit. The Jewish people as a whole have an incredibly rich and diverse history, a diaspora going back a few thousand years. It appears that the museum seeks to highlight more than just the expected narratives, probably because they know that there’s simply so much to explore. In fact, the museum showcases the work of an incredibly diverse group, from New Yorker cartoonists to Bay Area teenagers. It’s certainly not just for those with an interest in the Jewish diaspora, or those of Jewish heritage. Anyone with an hour to spare and a willingness to learn can get something out of the Contemporary Jewish Museum.

The staff seem to be striving to foster more than just a one-sided aesthetic appreciation of their art. At every opportunity, they seem to foster discourse. Daniel Libskind, the museum’s famed architect, refers to the building in online portfolio as “an ode to dialogue,” demonstrating that even the architecture is dedicated to this end. Contemporary art, in a sense, is a major way of producing conversations between people, often those who don’t even know each other. There’s a certain thoughtfulness required to form an understanding of many of the Contemporary Jewish Museum exhibitions. 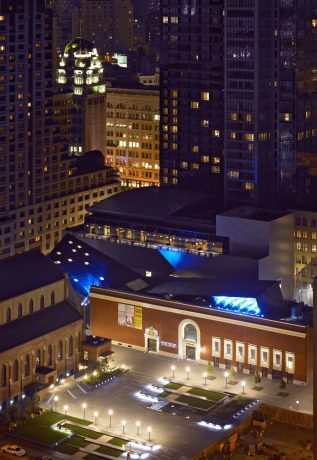 Aerial view of The Contemporary Jewish Museum, San Francisco, at dusk.Photo by Bruce Damonte.
1 of 2 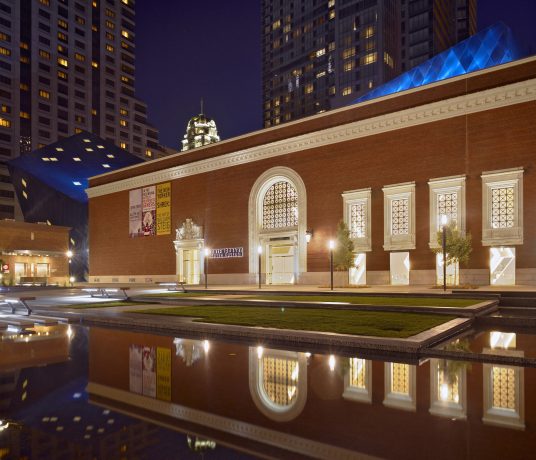 The Contemporary Jewish Museum, San Francisco, at dusk.Photo by Bruce Damonte.
2 of 2

An example of this ongoing exchange of ideas in action is the delightfully named “Night at the Jewseum” which is a monthly event, each with a different theme, usually relating that what’s on view in the galleries. It’s a cocktail hour of sorts, with activities, lectures, and the like, all for a reduced price of admission.

Naturally, Libskind’s extension much more than what meets the eye. The cube so prominently seen at the front of the building is referred to as the “Yud,” the Hebrew letter י . The Yud is where the museum hosts live performances as part of its contemporary arts lineup, along with drawing classes led by staff educators. The other part of the renovation that rises like a ramp out of the roof of the building, where the exhibition spaces can be found, is a representation of ח , the Hebrew letter Chet. Together, they spell “L’Chaim,” which is a 2,000 year old Hebrew toast that means “To Life,” making the entire museum a tribute to aesthetic existence. This is undistilled cleverness, at least to me. Plenty of buildings can have symbolic meanings, but few seem to be such a rich celebration of culture and history, while still being.

But the extension alone isn’t the only part of the building rich with metaphorical meaning. As previously mentioned, the original structure was created in 1907 and provided power to San Francisco in the wake of the devastating 1906 earthquake. The historical architecture is almost entirely preserved, a reminder of the city’s history in the heart of a vibrant downtown full of skyscrapers. In a sense, the building that once lit the city physically now enlightens it creatively. If you want to get punny, it’s a literal powerhouse of the museum world.

Daniel Libeskind may just be the king of museum architecture. He’s responsible for the 1998 addition to the CJM, along with Denver Art Museum’s Hamilton Building, the Jewish Museum in Berlin, and the Royal Ontario Museum, among (many, many) others. One can hardly visit any city in the western world without spotting his distinctively angular designs.

As a whole, the architecture is quite asymmetrical and somewhat chaotic. The crystalline cube is dotted with windows, but they’re smattered across the dark surface like stars in the night, meaningless until the mind connects them into constellations. It's like this both inside and outside the museum; the gallery walls are often far from the uniform flatness characterized by museums.

Part of what makes this asynchronicity so compelling is the contrasting uniformity of certain parts. The exterior walls are designed to resemble a grid of interlocking dark blue tiles, which are actually created in a special chemical process that guarantees that they won’t ship or fade, quite the feat in such a humid seaside city.

There are little architectural flares that are fascinating to examine when wandering around the museum. Small embellishments above doors, a hint of the early 20th century workmanship that went into the original building, like the plump forms of twin cherubs gazing down at visitors from the tops of doors or vibrant light fixtures in unexpected places. 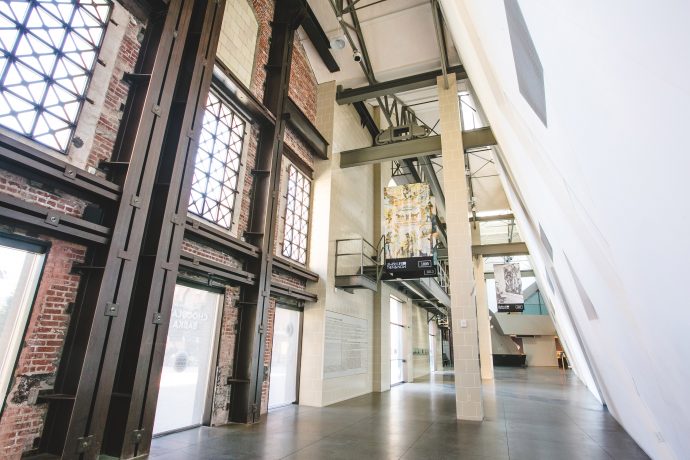 1. The Koret Taube Grand Lobby of The Contemporary Jewish Museum, San Francisco.
1 of 2 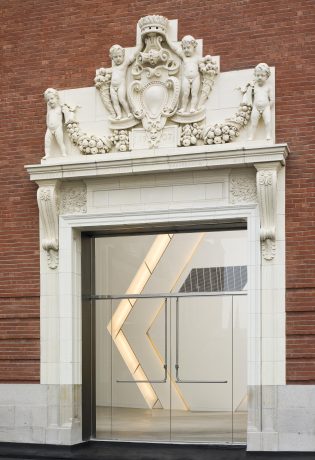 Historic details at the main entrance to The Contemporary Jewish Museum, San Francisco.Photo by Mark Darley.
2 of 2

The Wise Sons Jewish Deli (which we’ve written an entire article about!) is located on the first floor, just inside the doors. As you’ve probably come to expect at the CJM, it’s a vivid meeting of the new and old, with all the classic East Coast Deli fare made with local California ingredients for the freshest possible culinary experience. The menu itself is fairly exhaustive, especially given its limited space within the museum. It's actually quite refreshing to see such an innovative departure from the museum cafe classics; instead of saran-wrapped turkey clubs and wilted spinach salads, Wise Sons offers Reuben sandwiches and Matzo ball soup. I’m partial to the desserts (who isn’t?), especially since they’re so... unique? I think I’ve said that one two many times, but I can’t think of anywhere else on the west coast where I can get cinnamon Babka cake this good.

As any museum the world over, CJM also has a sizable gift shop full of unexpected treasures that celebrate both Jewish and San Franciscan history. There are dreidels and menorahs, of course, but also a biography of Ruth Bader Ginsburg for children and a cookbook full of traditional Jewish recipes. Even here, a meeting of new and old.

The Contemporary Jewish Museum, as a whole, is something not easily summed up. It’s a museum (but also a store, a restaurant, a meeting place), it’s contemporary (but firmly planted in the past), and it’s Jewish (whatever that term means to the artist in question). In any case, it’s certainly worth an afternoon excursion. 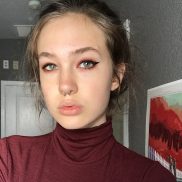 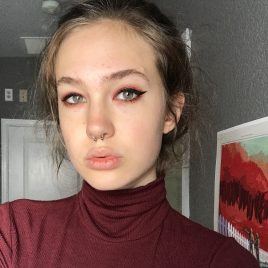 Alexandra Perkins was born and raised in Denver, Colorado, gallivanting around the Rocky Mountains on the weekends and studying dinosaur bones at the Denver Museum of Nature and Science on the weekdays. She is currently studying Anthropology at University of… Read more 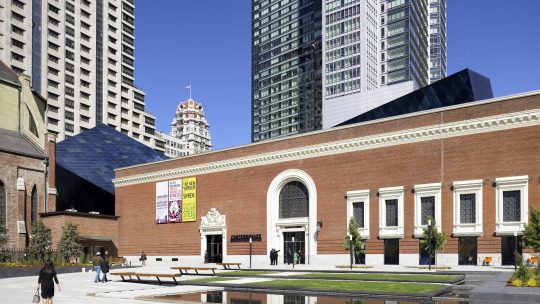 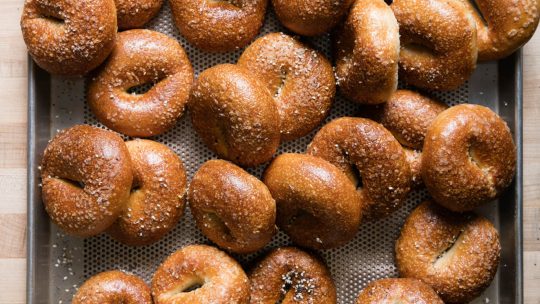 A San Fransisco museum to satisfy bagel and pastrami cravings