It takes around 15 minutes from the Budapest Nyugati train station to the city’s Museum of Fine Arts if you travel by tram. It was our first time in Budapest, and the brief fragments of the grand cityscape seen from the tram windows were my only impressions of the former royal capital before a fascinating private tour to the Museum of Fine Arts and its newly renovated Romanesque Hall.

During the visit, we had a pleasure to speak with Miriam Szőcs, the Head of the Department of Sculpture before 1800, about the renovation of the museum, the history of the Romanesque Hall, and the new museum program.

How did the idea for the reconstruction of the museum develop?

The museum needed new spaces that could be easily accessed and used by its visitors, but also by the professionals who work here – curators and conservators. Apart from the reconstructed exhibition halls, we now also have new storage rooms underground and more spaces for educational activities upstairs. There are more user-friendly areas like a new café, for example.

The key initiator is the general director of the museum, Laszló Baán. At that stage, there was no question whether or not we should have the reconstruction, as the main museum spaces were outdated. The Romanesque Hall was not restored since World War II. We only changed windows once, but the rest of the hall remained almost in ruins. There were plans to renovate the museum before, but it was difficult to find funding. This time the project was supported by the state.

Which exhibition spaces did the museum restore?

There are three iconic and most decorated halls in the museum that underwent restoration. One of them is, of course, the Romanesque Hall. The other two are the Michelangelo hall and the Schickedanz room right above it. All three spaces were designed by the architect Albert Schickedanz.

What was the history of the Romanesque Hall before the war?

The Romanesque Hall was opened in 1906 and used to exhibit plaster casts from the classical antiquity period until the Renaissance. In the twenties, the museum arranged to create a permanent exhibition of plaster casts on the ground floor. It was not possible to showcase modern and contemporary sculptures among prominent plaster cast artworks for temporary events. The idea of this prominent exhibition was also the reason why the architect created such a spacious hall. The replicas were on display until World War II. But now we can still see a plaster cast copy of the Golden Gate of the Freiburg Cathedral built into the entrance of the hall. The artwork reminds us of the past of our museum.

How will the reopening of the Romanesque Hall change the perception of the museum in the eyes of its visitors?

It will attract more visitors and ultimately will make the museum more popular. Since the opening of the hall to the public, we have received many guests. One of the main reasons why people want to see the gallery is its beautiful century-old wall painting by Károly Miksa Reissmann and János Glaser. If you look at it, you can see how well developed and carefully made it is.

What’s the story on this painting?

You can see different iconographic scenes connected either with the Christian religion or Hungarian history. Jesus and Angels or Madonna and Child represent the conversion of the whole country to Christianity in the times of Stefan the 1st, the first king of Hungary. He offered his country to the virgin and chose the Roman church to the Byzantine, making Hungary part of the western culture and religion. Among the figures from the Hungarian history are Saint Elisabeth, Saint Margaret, royals from the first house of the Hungarian rulers and several representatives of the royal court from the period of the Sigismund of Luxemburg who ruled in the 14th century. There are also paintings with the elements of nature such as trees, birds or dragons that have their symbolic meaning.

It must have taken much time to restore these.

Yes, but we had an excellent team of restorers. The style of the used patterns in these paintings is copied from the Medieval German panel. The idea was not to modernize but to preserve the style and the colors of the old artwork to convey the feeling that it is indeed a hundred years old painting. What nobody can see in this hall but what also symbolizes the connection to the initial work is a hidden bottle containing a note with the names of the painters who worked on the restoration of the hall. The artists who worked on the original painting did the same only a century ago.

Which events will take place here?

We already decided to have a permanent exhibition of the Hungarian and European medieval stone sculptures on the walls. The hall is beautiful but not entirely suitable for exhibiting contemporary artworks, due to the lack of light, for example. The open space will stay empty, and we will use it for public and private events. We want to emphasize the feeling of a privilege to come to the event at the Romanesque Hall. 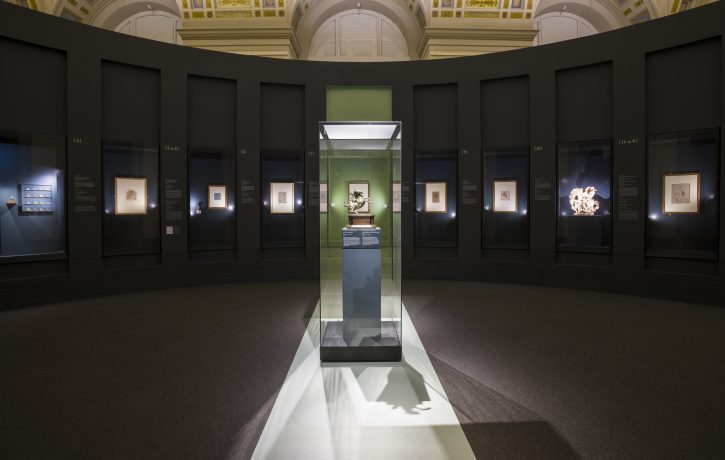 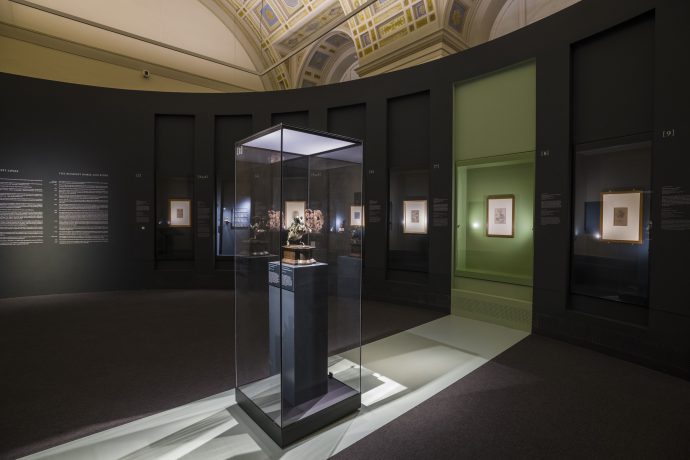 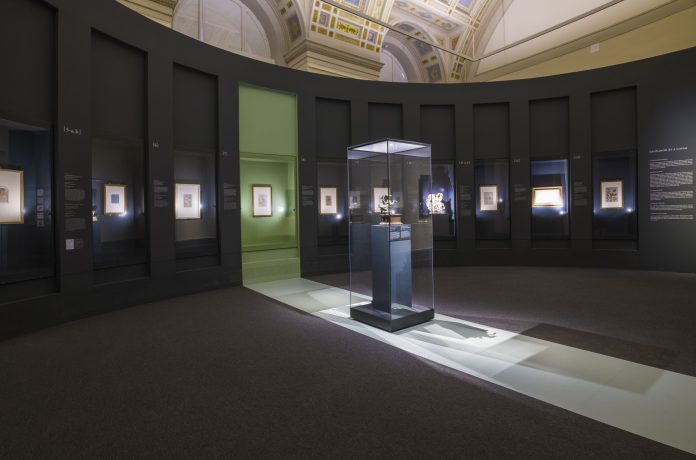 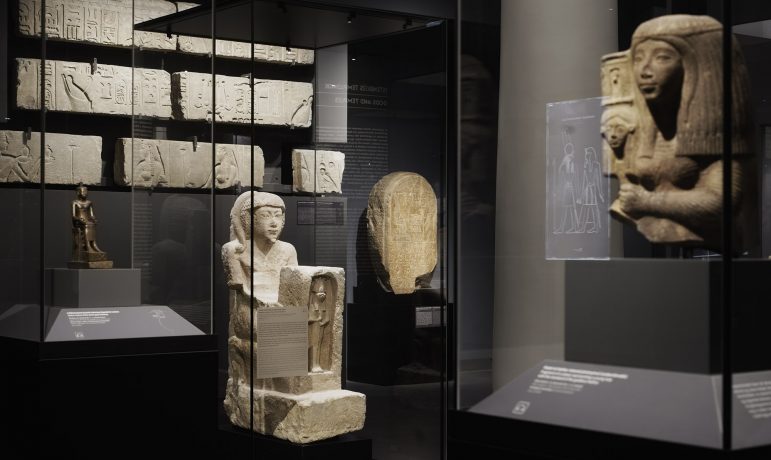 It feels special to be here. In the other two halls, you recently hosted the exhibition of Leonardo da Vinci, the first one since the reopening. Why Leonardo?

The warrior on a horse has variants at the Metropolitan Museum of Art and other museums. A decade ago, the MET announced that the sculpture in MET was the 19th-century cast, so everyone thought that our bronze was also from that time. In 2009 we sent the piece for technical analysis to the National Gallery in Washington. Luckily, after the examination, they established that it is a 16th-century bronze. For this reason, our last exhibition was devoted to Leonardo and this unique artwork.

What will be your next exhibition?

The next planned exhibition is called Triumph of the Body: Michelangelo and Sixteenth-Century Italian Draftsmanship. It will focus on Michelangelo’s figure studies from his rapidly penned sketches to his most exquisite red chalk drawings. Together with Michelangelo’s masterworks, the exhibition will also present several figure studies by his most important contemporaries. This will enable visitors to see a variety of ways in which artists at the time approached the problem of representing the human body.

Lent by some of the world’s most important public collections, this exhibition will be the first in the history of Hungary entirely devoted to the great Italian master.

* Triumph of the Body: Michelangelo and Sixteenth-Century Italian Draftsmanship exhibition - April 5 until June 30, 2019 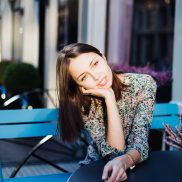 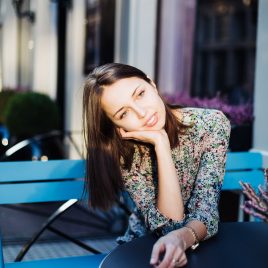 Lilia is an Amsterdam-based creative producer and branding specialist focused on the cultural sector. Her fondness for learning, appreciation of beauty, and sense of order guide her work. After completing her Bachelor’s degree in Advertising and Master's degree in Cultural… Read more 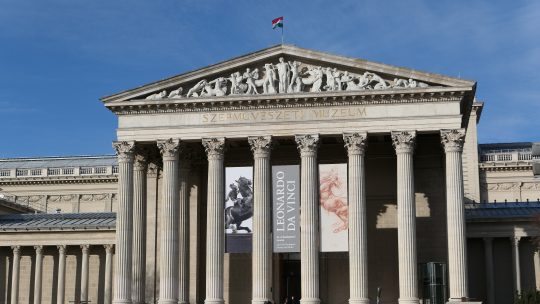