A Warsaw museum that glows in the dark – Museeum

We visit the city of Warsaw quite often as it never ceases to surprise us with its museum scene. This time, we managed to go to a unique, colorful and shiny place: the Neon Museum. We interviewed the Neon Museum team and its Principal and Founder, Ilona Karwinska to learn more about its origins and concept.

How did it all begin? What was the idea and which neon was the first one in the collection?

The project of researching and renovation the neons has been run by us for ten years. It can be said that everything started with a coincidence, an idea came from abroad. At the end of 2005, the photographer Ilona Karwinska, who lives in London, came to Poland for a brief visit with her partner, David Hill. David, who professionally works as a graphic designer was in Poland for the first time. While driving along Swietokrzyska street in Warsaw, he got totally stroked by the neon of an old-school dancing place at the Prudential building. As a person with the background in graphic arts he knew a lot about typeface, though he never had seen such types of neon, often hand-designed ones… He just said to Ilona: „Wow, you really should take some photos of this” and that’s how it all started…

At the beginning the whole project was to be rather short, though it started evolving into the adventure that lasts until now. The list of the neons that were to be photographed started with the neon „Berlin,” which hung at Marszalkowska Street by famous Zbawiciel Square, just above the shop with the household appliances. When Ilona came back only few days after with the camera, the neon just disappeared. She quickly contacted the owners, who admitted that the neon was just old and dirty and they wanted to get rid of it. Thankfully, Ilona managed to rescue that neon and during the first exhibition it was renovated. Simultaneously, Ilona managed to reach the company Reklama and people who actually created „Berlin” in the 70s. The beginning was difficult, they doubted in the sense of renovating such an old sign, they tried to convince Ilona that it would be cheaper to make a new one, even with using the old material. Though with time and popularization of the issues of old neons, they started to willingly cooperate with the following projects. As the project was developing there were more and more neons to be collected. It was even before the idea about creating the museum was born. The next exhibitions: in Warsaw, Wroclaw, London and Amsterdam and the paper publications each time turned out to be very popular and they were received with the warm acceptance.

At some point, precisely in May 2010, we decided that it would be best to gather and display neons in one place. Especially that the old signs, usually composed from the glass tubes are really delicate and they don’t deal well with the transport. This brave idea turned into the existing museum after two years, thank to the hospitality of the Soho Factory and it was opened for public in May 2012. The Museum attracts more visitors each year, only the last weekends we counted up to 400 guests from all over the world, even from Brasil, Australia and United States.”

What does the process of searching for the old neons usually look like, and how long does it take?

Usually the neons should stay in the places where they were designed for — in the past, each sign was carefully prepared for the specific location. Obviously, it’s not always possible nowadays, because the Decorative Fabrics just doesn’t fit above the drugstore and Public Library over the second-hand, vintage shop. The idea behind the museum was to create a sort of home for those unwanted neons which just can’t stay in their original place. Generally it’s the buildings’ owners who are contacting us, asking if we could take care of such old sign. We also have quite a big group of museum friends, who keep us informed about such endangered neons. Possibly the most interesting story is connected to the neon of the Restaurant Ambassador. The former Luxembourg Ambassador in Poland, Ronald Dofing, was very much interested in art and design of the time of Polish People’s Republic (communistic times). During the drive down the Ujazdowskie Avenue, he noticed that the neon is being taken down. He sent his secretary to save the sign and it was kept in the garage of the embassy. Ambassador, when leaving Warsaw for good, he gave us the neon to complete our collection.

What difficulties do you usually have to face?

The biggest challenge is always the renovation of each neon, as it requires a lot of funds. For example, the refit of „Hotel Saski” cost about 10 000 złoty (approx. 2 thousands pounds). A meter of glass, depending of complexity of the neon, is about 100-150 złoty. What it means is that we need to acquire sponsors to be able to do so. Apart from that, we tend to face difficulties because of the private collectors. Sometimes certain antique neon „disappears” from the public space, which means that they were simply stolen and landed in the private hands.

Which exhibit is the most valuable one?

It’s really hard to choose one! Surely, there are quite few such examples — Mermaid on the Book, which is a symbol of Warsaw libraries and the city itself. It’s our most characteristic neon, which everyone is taken a photo with and which is mostly present in the social media (quite a few people call our museum „an Instagram Temple”). Pretty popular is also a cocktail glass from Milk Bar Ladybug with the beautiful script, the glass tube which portraits handwriting. Also, there is Berlin, which started everything. It’s made from transparent glass tube, where the gas neon can be clearly seen and it has beautiful red color. The list is pretty long!

Which neon is the oldest one?

There are three neons from the second part of 50s — Cepelia from Konstytucja Square, the letters (some are missing) from the railway station Stadion, and the continents from the globe from the Orbis apartment house.

What’s the idea behind the action „Action Renovation!”

Museum’s activity doesn’t only restrict to collecting and displaying the old neons. We also publish, run certain educational programs as well as we have a mission of popularize the topic, which a great example is the competition run by us „The New Neon for Warsaw.” In the result of it, the inhabitants can admire a new neon „Nice to see you!” on the Gdański Bridge in Warsaw. Our latest action is „Action Renovation!” which main goal is focused on restoring the old neons, also in the public space. The last one we managed to renovate is „Mydła Farby” from Nowolipiki, Muranow, which currently is displayed in the museum. Another restored neon was „Bajeczny,” which is a name of the popular chocolate bar that was hanging above Wedel store in Saska Kepa.

Neon Museum is open the whole week, excluding Tuesday. It’s located in the Soho Factory, which was created because of the strong urge to conceive creative and artistic space for Warsaw as there is no district that is just dedicated to the artists in the city. The space used to be the settlement Kamion (Stone) that history reaches back to 11th century. That’s simply another reason to visit Neon Museum and immerse yourself with the great atmosphere of this beautiful place.
Share 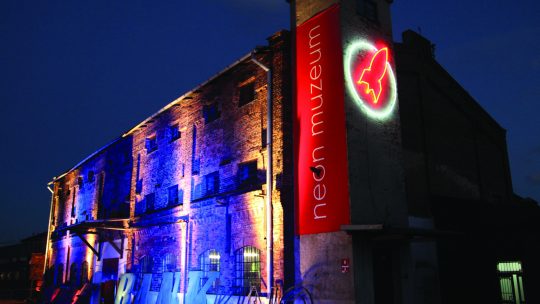