Located in Guadalajara, The Hospicio Cabañas is a truly unique institution in the beautiful state of Jalisco in Mexico. Officially made a Unesco World Heritage Site in 1997, it has a very long history which starts in the18th century. This old and large hospital complex was founded in 1791 by the Bishop of Guadalajara Juan Ruiz de Cabañas y Crespo in order to combine the functions of a workhouse, hospital, orphanage, and almshouse. Today it is a cultural institute and an art centre. Built by the architect Manuel Tolsá, who is famous for introducing neoclassicism to New Spain (a term used for Spain’s colonial possessions in the New World) and founding academicism there. Influenced by Spanish and French architecture, Tolsá’s design was layered upon classic examples such as the Hôtel des Invalides in Paris and the El Escorial near Madrid.

The overall composition is formed by a rectangular plan measuring 164 by 145 meters. It contains a complex of single-story buildings laid out around a series of 23 courtyards varying in size and characteristics. The long corridors are led by Tuscan-Style arches and pillars which cover and provide cool shade for its visitors, and are also filled with orange trees and dazzling plants. Followed by the major chapel which has a dome decorated with iconic and doric columns rising 32 feet high. The complex is erected on one ground level, so as to facilitate the “movement of the sick, the aged, and children.”

The construction was finished in 1829, six years after the death of Bishop Cabañas. The building itself briefly served as barracks in the mid-19th century and as hospital which lasted well into the 20th century and continued to function until 1980, when the Cabañas Cultural Institute (Instituto Cultural Cabañas) was finally created - a space for arts and crafts. The Institute’s museum hosts exhibitions throughout the year with works of notable Mexican and international artists, as well holding the estate and collection of the painter Roberto Montenegro and a series of works from the German-born architect Matthias Goeritz.

The absolute highlight of any visit to this place is the interior design of Hospicio Cabañas which contains the monumental series of frescoes painted by José Clemente Orozco between September 1937 to March 1939. Orozco is one of Mexico’s most powerful muralists alongside Diego Rivera and David Alfaro Siqueiros. The murals include one of his most well-known creations - the allegory of ‘El Hombre de Fuego’ (The Man of Fire) painted between1936-39, while the Spanish Civil War was still raging. It depicts fire as one of the four elements, showing it as a sacred entity with powerful transformative qualities, it is also linked to the idea of sacrifice and blood and the emblem of the human condition. 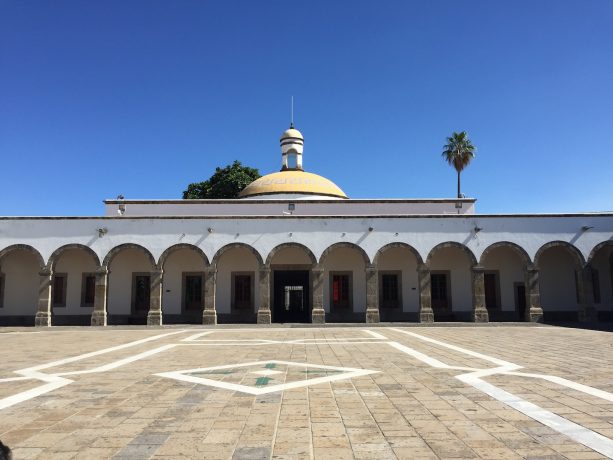 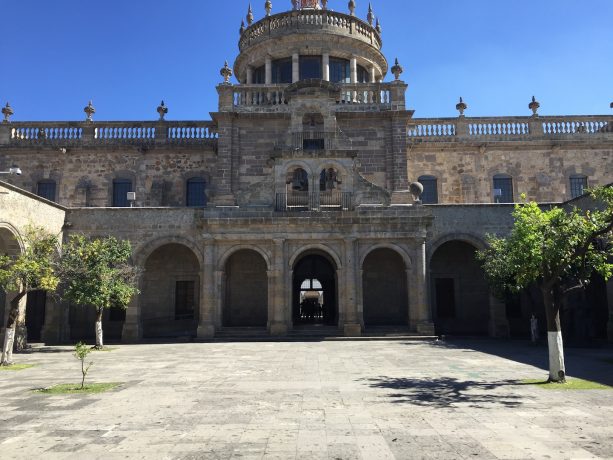 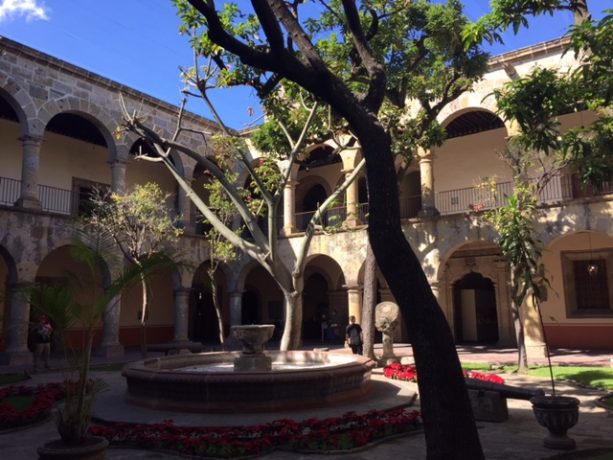 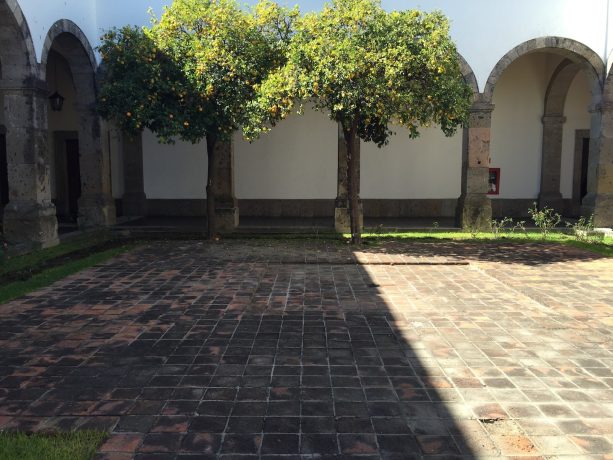 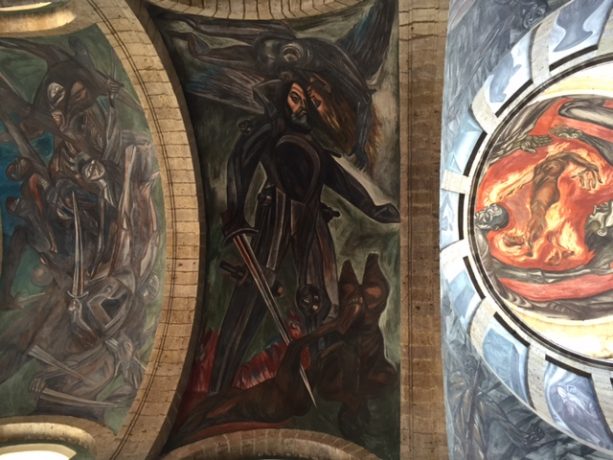 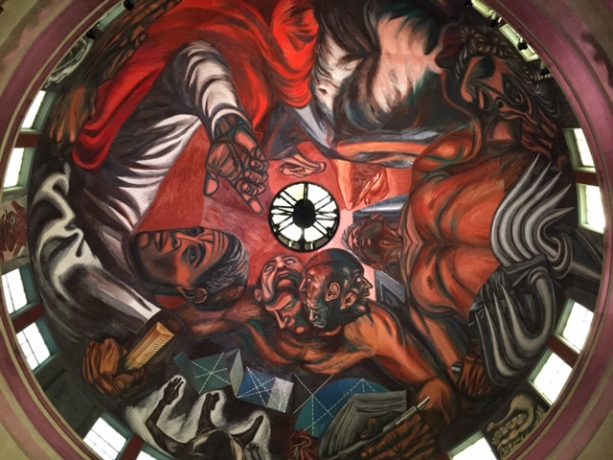 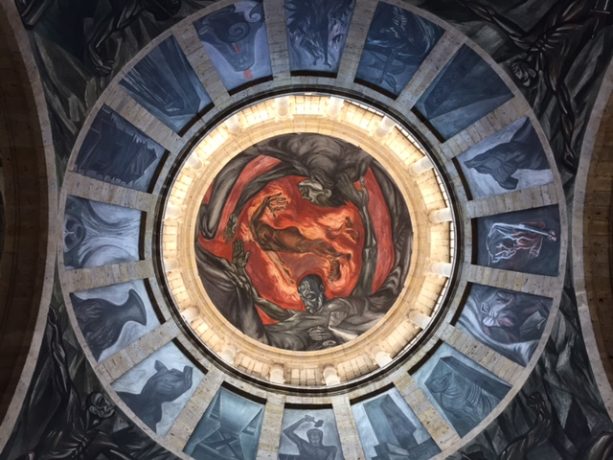 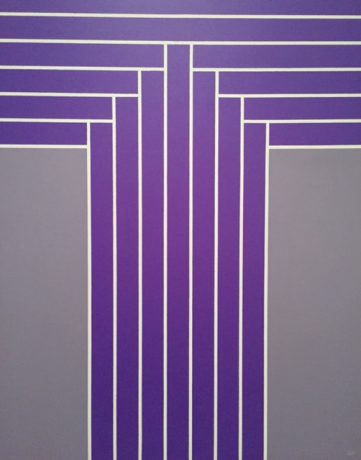 I sat for an hour with my head down on a nearby bench in order to fully grasp the dimension of this massive installation and the frescoes series. A true monument, and just like the patients must have felt a bit closer to heaven, one’s eyes awestruck, trying to take in all the magnificent details of the various parts of the 57 murals, making up this one whole unique picture, and trying to SEE this gigantic historical puzzle.

The murals take us slowly through the distinctive and difficult moments of Mexican history - from the Pre-Hispanic cultures, to the conquest and oppression by the Spanish. Representing the ambivalence of the Conquest by the confrontation of Hernán Cortéz’s sword with the cross wielded by a Franciscan friar. Indigenous motifs and elements of the former Aztec empire have a strong presence throughout, as well as the turmoil of the Mexican Revolution is a strong representative element. Orozco’s bold manner and style in displaying the human condition are unique, challenging social norms and conventions about race and identity. This public art monument no doubt has an incredible historical value, yet I felt it was the powerful visual and aesthetic experience and journey that truly made it so special and worth visiting. 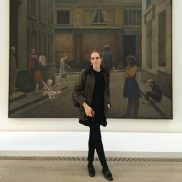 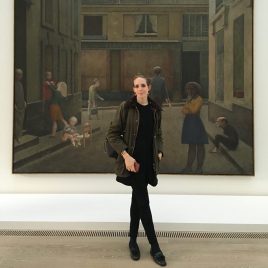 With a BA in Art History from Goldsmiths University in London and a Masters degree in Curatorial Studies from London Metropolitan and the Whitechapel Gallery, art appreciation flows through Antonia’s veins. She currently works at Galeria Berinson in Berlin and… Read more 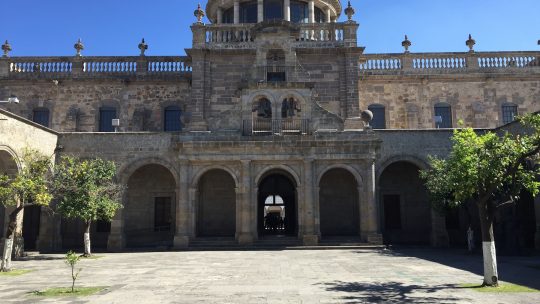